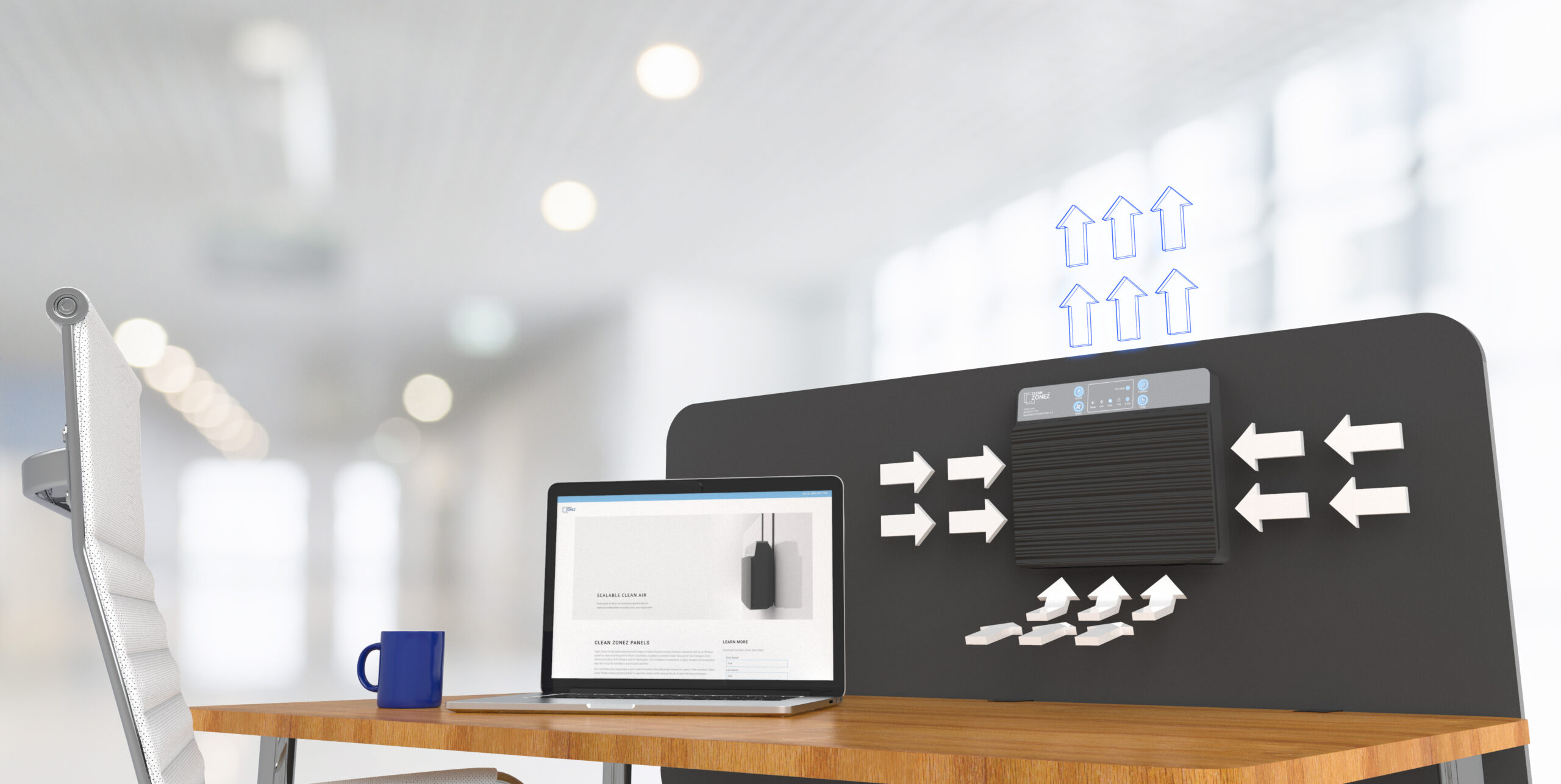 Posted at 06:02h in Office Air Purification by admin

Workers can feel safer returning to offices around the world with the creation of the Clean Zonez Panels, which treat and filter air at the point where it is exhaled at individual work stations, rooms, and other spaces.

The idea for the panels, developed by California-based Zonez, was hatched shortly after the Covid outbreak in the United States in March, and the patent-pending technology was created in April.  The panels, which can be mounted at workstations, on walls, and in rooms, treat air where it is exhaled, coughed, or sneezed and utilize intake fans that put air into five layers of air filtration, including HEPA filtration and UV-C sterilization.

“We knew that HVAC wasn’t going to work and that we had to bring the solution to the source,” said Sande Golgart, President of Zonez. “That’s what separates us from everyone else.”

Golgart said the Clean Zonez Panels block and clean contaminated air at the source, where the air is exhaled, coughed, or sneezed into the environment.  Clean Zonez Air Filtration Systems should be installed at every occupied desk along with every meeting room and all common areas, including restrooms.

The Panels are a far more effective solution than HVAC systems, which cannot clean air at the source of desks or workstations.  It is important to remember that air is the most shared resource of any workplace.  If the air is not captured at the source, the contaminated air will be shared by everyone in the workplace.  Golgart said the filters and UVC lights within the devices should be changed yearly. Each filter is less than $15 to change, he said.

Zonez is brand manufactured and owned by Allied Modular Building Systems Inc., which has successfully completed more than 30,000 projects in 38 countries ranging from $10,000 to $1 million-plus on each project. Allied Modular, which has more than three decades of industry-leading expertise and ground-breaking technologies, has worked with almost every Fortune 500 company with the exception of those in banking and finance.

After Covid spread to the United States in March, Golgart spent 10-hours-plus a day for weeks participating in group discussions with the top facility management leaders in the world. From feedback, his team developed the panels and expedited applying for a patent. The first prototypes were assembled in late April with the first batches sold in July.

“We didn’t create any new science, we just used our experience to create these devices,” said Golgart, who lives in Seattle and played basketball at the University of Colorado. “We weren’t trying to force an idea on the world. We were listening to the world and seeing where businesses needed to be helped. There was a need to have people return to work and feel safer and these products will help them do that. This is designed to block and then vacuum up air and provide the highest probability of minimizing Covid or anything else that’s in the air.”

Golgart’s college-age sons themselves were diagnosed with Covid upon their return to the Pacific Northwest. Golgart, who has been working out of his Seattle home, said the panels have helped him avoid Covid and have increased the air quality within his residence. The filtered air has helped him feel fresher and more energized, working deep into the night.

“I don’t need an energy drink; I just needed the better-quality air,” Golgart said. “I was thinking more clearly when it really mattered.”

Golgart said the next evolution in the products will be determining how to integrate them directly into walls without hooks and have clients be able to personalize or customize them.